This bunny touched East Coast water! I spent a weekend in Boston, and boy was it beautiful!

There’s a bar in the outfield at Fenway – yummy drinks and eats. 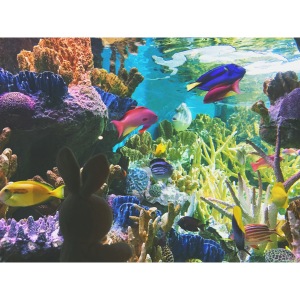 Spent a morning at the New England Aquarium. Nemo was nowhere to be found.

Made a few friends in the “Touch Tank”. They weren’t thrilled.

This dude was pretty nice – he made me feel guilty about that Lobster Roll I ate the night before… even though it was DELICIOUS. 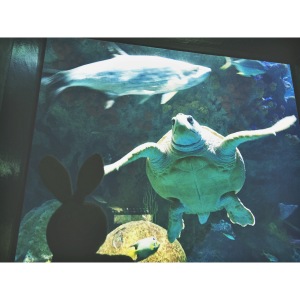 This is Fin. Fin is 45 years old! He eats lots of lettuce all day long, but his favorite food – brussel sprouts! 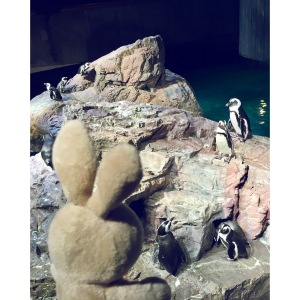 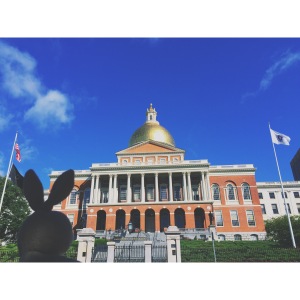 This was part of the Freedom Trail. Can I remember what it is? Nope. But it sure was pretty!

This may have been the best part of the trip – Kane’s Donuts.

Until next time, Boston. I’ll be back!

Oh Disneyland… how truly magical you are. You are welcoming and exciting to all kinds – even a cotton-tailed fuzzy bunny like myself. I had such an awesome weekend exploring both parks – my favorites were Cars Land in California Adventure (for a special treat, see it at night with all the neon lights), and The Thunder Mountain Railroad in Frontierland.

I started the day off in Cars Land – so much fun! The Radiator Springs Racers were fast (be sure to check out my video at the end)! 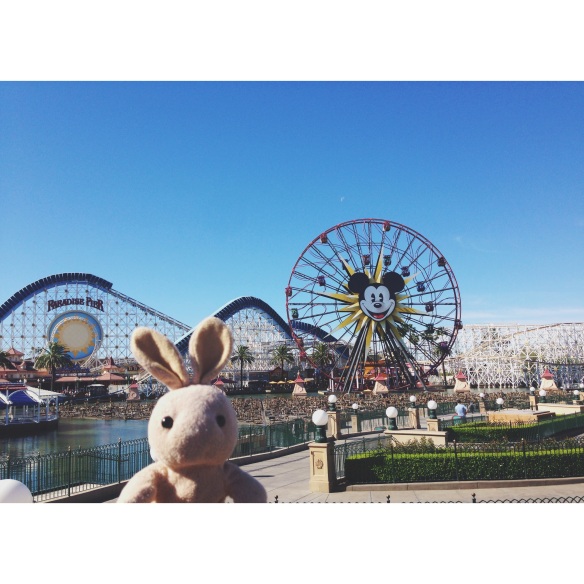 A perfect day for a roller coaster. 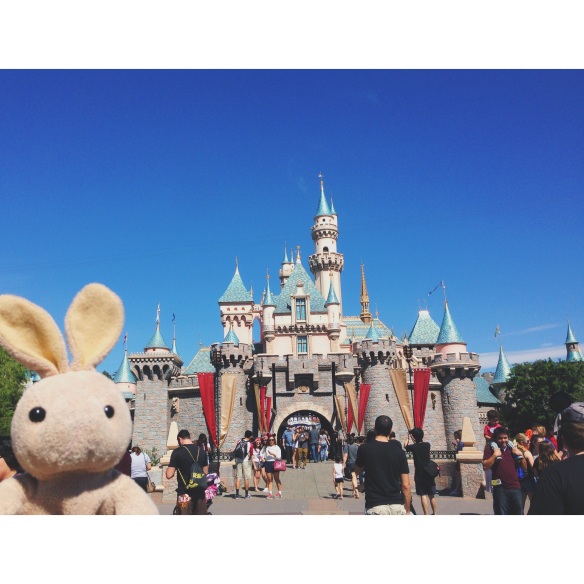 After a few hours in California Adventure, I hopped over to the main park, where I tried to nab myself a date with Sleeping Beauty… it didn’t go so well. 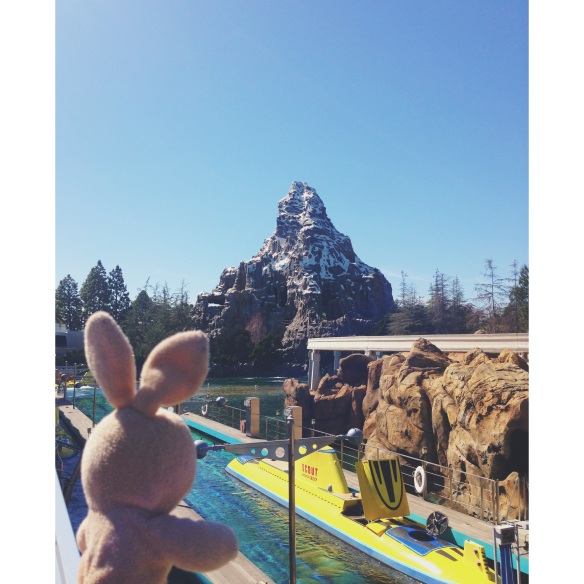 Check out this view from the Monorail! 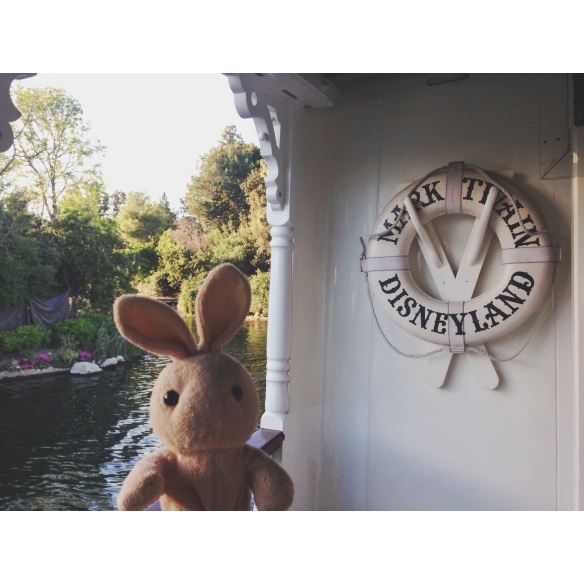 Took my first ride on the Mark Twain – I saw lots of wild animals.

Found myself a seat!

Grabbed a nummy mint julep to cool down on this toasty day.

One of my favorite rides at the park – the wildest ride in the wilderness! (Thundermountain Railroad, of course)

Feast your eyes on the first bunny in space!

Ended the evening with a milkshake back at Flo’s V8 Cafe in Cars Land. NOM.

Were you all beginning to think I would never come back? I just returned home from my 11 month stay on the island. I am one lucky bunny!!! 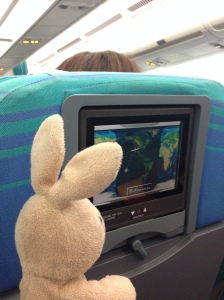 On the flight over, I watched a little tv! 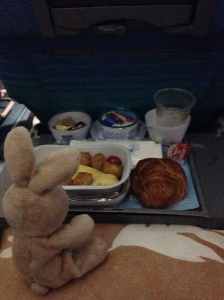 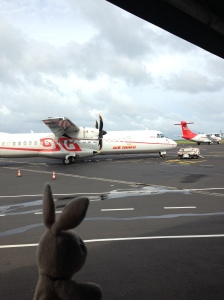 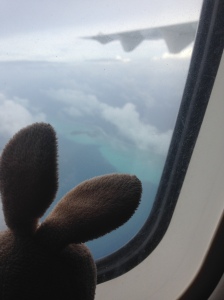 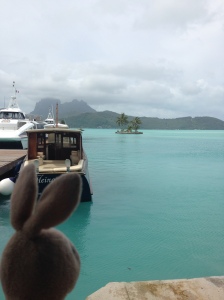 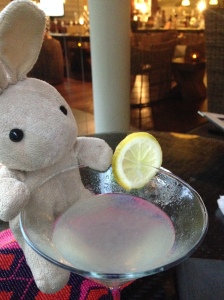 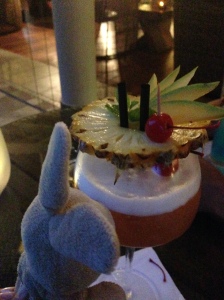 … and a little more refreshment.

I could get use to this.

A see through table in my hut! 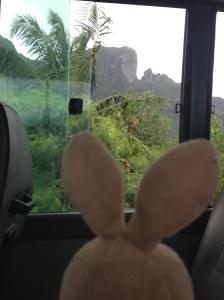 Hopped over to the main island to check out the town. 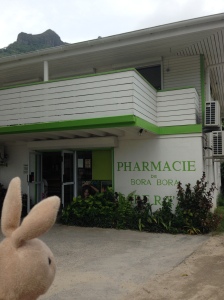 Picked up some goods.

This was my captain 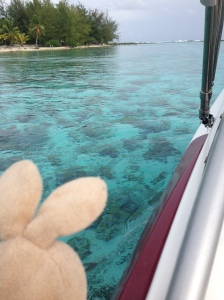 I learned all about the native fishies. 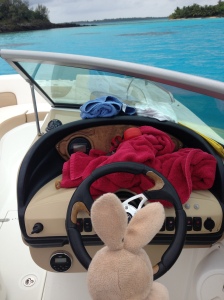 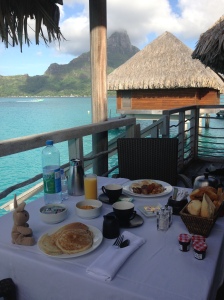 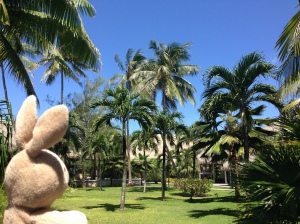 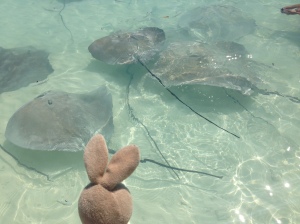 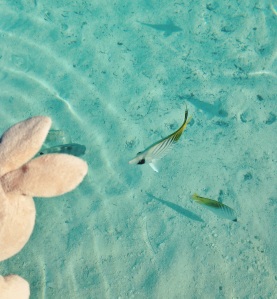 Fish are friends, not food.

Apologies to all of my loyal Bunny Fans – I am so, so, sorry for my absence the last few months. My Mimi was busy planning a wedding! Here she is with her new hubby, Brandon. She told me the best news of all last night – Mimi said if I’m a really good bunny, I can come with them on their honeymoon to Bora Bora!!! I can’t wait to share my photos with you all! Be back real soon (I promise, really. I promise).

Hey there Instagramers! You can now follow me at @thebunnyadventures.

Off to Germany I go!

There was lots of mustard on the drive.

As usual, I got pretty hungry.

I pulled over at this yummy place!

I had spatzle! Mmmmmm

See that back there?

Oh my GOODNESS. A STARBUCKS! Thank you, German Bunny God.

Heidelberg was fun to walk around.

What to have, what to have? Definitely not the goose dripping. Icky no no!

A German beer, of course.

And some yummy weenies!!!

After a day in Heidelberg, I headed on over to my final stop – Munich. The Autobahn sure was fun to drive on.

I was a good navigator.

I stretched my legs after the drive around town.

This is what I was most looking forward to on this whole trip – The Hofbrauhaus. Beer, weenies, and pretzels galore!

My first beer garden! Love it!

Meet my friend, Hans! Those claws looked a little suspicious…

That beer was too big for this bunny.

Finally! The pretzel lady came by!

Oh Munich, you ruined me. But yet, I still love you. Night night.

When I awoke, it was time to head back to the states. Checking out the train schedule was a little confusing.

Fortunately, I did manage to get on the right train.

The drive was cloudy, but still beautiful!

We arrived at our hotel in Sestri Levante later that afternoon.

I went for a walk around the grounds – check this pool out!

Went for a little walk before dinner.

Went to El Pescador – Mmmm GNOCCHI… and some dead animal.

Goodbye, Sestri Levante – I’ll be back!

We made our way from the coast of Italy on over to Tuscany. First we stopped at San Gimignamo.

San Gimignano is a small walled medeival city in the heart of Siena. Architecture was pretty sweet!

The food was pretty Delicious too!

Lots and lots of people around!

So apparently boars are… plentiful here in Italy… and delicious? I didn’t want to eat her though, she was too cute 😉

It was just a short drive from San Gimignano to our hotel in Montepulciano – the San Bruno Relias hotel. This is my room!

I somehow was just constantly hungry everywhere I went in Italy. I couldn’t resist all the deliciousness. This place was just up the hill from our hotel – La Grotta.

Sucks for that bunny. But not for this bunny!

Vino in my belly.

After being on the road for a little over a week, it was time to do some laundry. This magical contraption looks interesting though…

Ohhhh, duh. It’s a tanning bed! Of course! So nice for the laundromat to have a bunny-sized tanning bed ready for me.

I tossed some laundry in the machine…

… then went nextdoor for a yummy beverage while I waited.

After laundry, I went for a cruise around the town.

All those are made from the olive treest around here!

It just never gets old.

The grounds at the hotel were beautiful.

It was just below Montepulciano.

San Bruno Relais had its own little vineyard.

This was my favorite part.

Gettin’ my tan on in Tuscany!

I think I used this once. That’s it.

I was a little crispy from my previous session at the tanning bed, but I didn’t care.

That night, we went to Il Covo – probably my favorite place to eat during the whole trip.

This was yummy! – Vin santo, a dessert wine that you dip biscotti in.

This was the owner of Il Covo, he was awfully nice.

The next day, we went for a little more roadtripping around Tuscany to each of the little villages.

I had to go potty after my walkin’ around.

… nevermind. WHAT IS THIS?!

I always make time for lunch.

This was a thermal bath in San Filipo.

It was time to say goodbye to Tuscany…

… and goodbye to my friends at the San Bruno Relias Hotel.

Lots of people at the leather market – purses everywhere! Just what I don’t need.

Beautiful view from my hotel room.

This was definitely one of my favorite dishes the whole trip – prosciutto and melon.

I was SO excited to see the David!

The line was long.

But, well worth it.

This is the Ponte Vecchio bridge –

Florence was beautiful at night.

Cars my size were everywhere!

I capped off Italy with a delicious, final dinner at Osteria Vini e Vecchi Sapori – only about 15 tables in the whole place.

Our waiter was very loving. He liked this bunny a lot!

Switzerland is BEAUTIFUL! I like it here, I saw lots of pretty architecture, and ate nummy food. Check it out!

After Denmark, we made the long drive down to Lucerne, Switzerland – I loved my hotel!

Such a nice view out my window.

This is the Chapel Bridge and Water Tower in Oldtown Lucerne.

Had some yummy lunch here.

The Chapel Bridge at night was beautiful.

So much chocolate everywhere here!

Well hey there boys! Wanna come back to America? … I mean … no …

Tulips were everywhere too.

The next day was beautiful – a little more blue sky was showing.

But, still not enough to see all the pretty mountains… sigh.

The biggest macaroons I’ve ever seen!

These are white asparagus – delicious! They’re in season, and they’re everywhere!

First stop on the trip – Denmark! Denmark was such a beautiful, fun place to be. We left Phoenix, Arizona and flew to Denver, Colorado where we got on our big plane to Frankfurt, Germany. After arriving in Frankfurt, Mimi and I rented a car and drove up to Denmark to see some of her family. Click on the first image to scroll through my album!

Ready for my flight to Colorado to get on the next plane to Germany!

Man these seats are comfy.

Seriously? This bunny is lovin’ on business class.

I rented a car and drove from Frankfurt to Hildesheim for a night’s rest. Just a few hours drive to Denmark tomorrow.

I was so tired, but had to walk around the town for a little bit.

Welcome to Ribe, Denmark – where some of my Mimi’s family lives!

We saw a dairy farm!

These are the wittle babies.

This milks the cows automatically.

So this was slightly random… but OH MY GOD. JACKALOPE?!

Nutella was awfully popular in Denmark. This thing was a tank!

We explored this really cool church in Ribe too.

Right by it is the oldest hotel in Ribe.

This is the smallest house in Denmark!

I found some interesting things while walking around… even a kangaroo!

This is my friend, Maria ❤

We went to another one of my Mimi’s family farms.

This farm had lots of horses.

He was huge! And kind enough to take me for a spin.

This was my Mimi’s Granny and Grandpa with my Granny’s cousins.

Lots of Windmills in Denmark too.

After spending time at the farm, we headed a little more North to Odense, Denmark to see a family friend of my Mimi’s Mommy – lots of fam time! It’s been so much fun.

I went for an evening walk and saw lots of farmhouses and beautiful green land everywhere. I was so tired and the end of the day, but was looking forward to our next stop – Switzerland! Can’t wait.

Well guys, this is it. I will be on my way to Europe tomorrow morning for a little over two weeks! I’ll be busy hopping through Germany, Denmark, Switzerland, and Italy. I can’t wait to share my adventures with you along the way – just don’t miss me too much though, okay? If you have any suggestions on nummy things to eat, or fun things to do, please comment and let me know. Ciao! 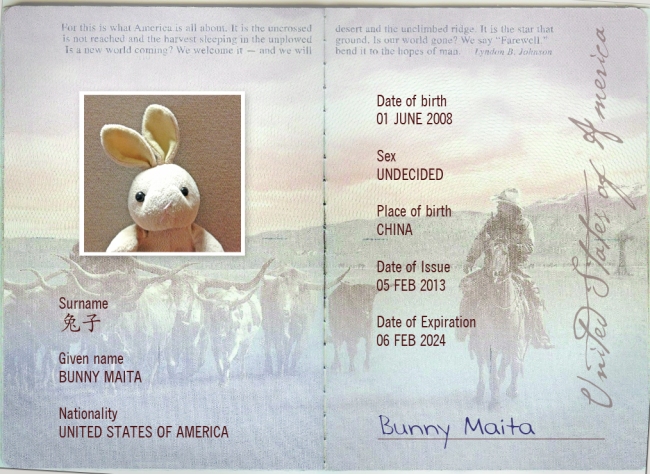